The entrepreneur would like to be visionary thinking: Success story of inspirational entrepreneur-Majibur Rahman 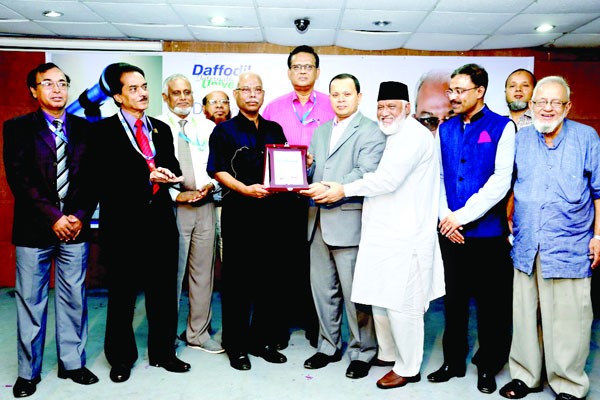 Majibur Rahman said to the students in the public interest organized by the Innovation and Incubation Center of Daffodil International University, "The visionary initiative needed to be an entrepreneur. When I started business in 1978, the electricity situation in the country was very bad. When electricity came out of Dhaka, it was difficult to tell when it was going. At that time we realized the possibility of massive electrification in the country. His use of electricity was imported from abroad. Then I decided, I will produce this in my country. These foresighted decisions change my fate. '

Daffodil International University (DIU) has arranged to listen to their hardworking and diligent lives from the mouth of the entrepreneurs who, through hard work and honesty, have created themselves as successful entrepreneurs by eliminating the cunning way of deceit, fraud, corruption and irregularities.

On this occasion, 12 successful entrepreneurs of the country's industrial sector have organized 'DIU Industry Academy lectures on entrepreneurship development'. In the third phase of the public debate on 12 episodes, BRB Cable Industries Limited chairman said on Saturday. In his speech, Mozibur Rahman presented the story of the success of today's success with the path of long struggle and presented the story to the students.

At this time, he said, 'I do not know how young students will benefit from the story of my life, I do not know. But you can only say that life is not an unsurpassed highway, where everyone on both sides of the road will stand for the dual flower arrangement for you. Rather, life is a thorny forest, along with the thorn in the path, along with the risk of attacking unknown forests of forest! You have to deal with those challenges - whether you want to help the entrepreneur or entrepreneur whoever wants to be. '

Considering the geo-social framework of Bangladesh, all industries and factories should be out of the capital, according to Majibur Rahman. He said, "The government has started acquiring it that is why the initiative has been taken to transfer the unplanned industrial factories out of Dhaka within the boundaries of the capital. So, the newly created economic zones, industrial towns, industrial parks, EPZs are being established outside Dhaka. In this case, I am very happy to say that I have been able to establish my industrial factory in a very backward environment 35 years ago, in a planned industrial area far-off, in BSCIC industrial zone. The environment was not only saved, but I also got some employment opportunity for the people of that area. '

Majibur Rahman said, "The market potential of various products produced in Bangladesh is now spread everywhere in the world. Those possibilities, we have to find out more opportunities and have to work. The future history of Bangladesh will be drawn to the history of our young people moving forward in many areas of the world in the industrial sector. '

Majibur Rahman believed that students must acquire practical skills as well as knowledge acquired from the books. Daffodil International University curriculum, in addition to applying technical education, along with the students involved in various industries and factories are actually giving them the opportunity to become operational. He urged other universities of the country to follow this path.

Majibur Rahman said, "I dream of that Bangladeshi university is waiting long enough to listen to the experience of Sufi Mizanur Rahman or Syed ManzurElahi. Besides, I also dreamed that the youth of Bangladesh is working as a manager, production manager, marketing manager or technical consultant in the field of foreign trade. '

The successful entrepreneur for the students said, "Policy-morality, honesty and mental discipline are not the only subjects of worship rooms. In all cases of life, life and livelihood and income-earning must also follow them.